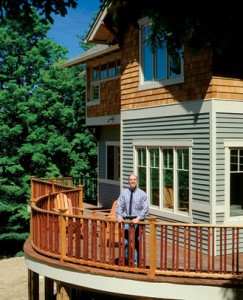 Custom home buyers are drawn to Saratoga home builder, Capital Construction, and the homes of Louden Ridge for its rural quality and pastoral character within four miles of downtown Saratoga Springs. Many lots back up on hiking trails that surround Louden Ridge and access the Saratoga County Forest and Wilton Wildlife Preserve and Park. Open meadows and wetlands attract many species of wildlife and a New York State Department of Conservation (NYSDEC) registered trout stream and tributary of the Kayderosseras Creek runs through Louden Ridge.

The goal of Louden Ridge is to minimize its footprint on the land and build homes in harmony with the natural environment. This means of course that new home construction in Louden Ridge takes into consideration its surroundings and that each home is therefore a custom green home unique to that lot. Custom Builders typically only consider the box they are building but at Louden Ridge we believe that the natural environment is every bit as important as the built environment. With this principle in mind we strive to build houses that are placed into the natural surroundings and not forced upon it. Local existing eco systems and natural features that are native to Saratoga Springs are preserved. Trees and streams are seen as an asset to be protected and those natural qualities are often mimicked in the house design for a selected lot.

Prior to building on any lot a survey of existing trees is performed. Old growth trees such as oak, maple and poplar are identified and cordoned off to avoid damage to their root systems. Some of these trees provide suitable habitat for endangered bird species according to the United States Fish and Wildlife Service. Many were saplings when this area was dotted with apple orchards and Early American dairy farms. Native Americans roamed these forests in search of food and building materials to bring back to their encampments along the shores of Saratoga Lake.

Home buyers are attracted to Louden Ridge as much for its’ rural character and history as for its proximity to downtown Saratoga Springs and its many amenities. Those amenities include, to name a few, the Saratoga Performing Arts Center (SPAC), Skidmore College, Yaddo Artists Retreat, and the Saratoga Race Course owned by the New York Racing Association (NYRA).

Louden Ridge is uniquely situated to take advantage of the many attractions of Saratoga Springs yet remote enough to appreciate the serenity of rural living in Saratoga County and Upstate New York.

Posted in: News & Events | The Latest